One thing we weren’t prepared for was how big Walt Disney World is. We’ve been to the Disneyland counterparts in LA, Tokyo and Paris – but Orlando’s is called Walt Disney WORLD for a reason: it’s massive. Since the tickets can be pricey and we didn’t have a lot of time, we settled on a 1 day park hopper ticket, allowing us to hop between the parks and see as much as possible. We calculated that we’d have from 8am to 11pm, and would plan ahead. Here’s our tips to visiting all 4 Walt Disney World parks in just 1 day:

The happiest place on earth!

We looked into which park was open first, and which one closed latest – determining part of our schedule. It changes every day so make sure to check in advance! For us, Hollywood Studios was open first at 8am – so we made sure to be there from 745am to get the most out of our day. Magic Kingdom was open till 11pm, so that was the park we visited last.

Research ahead of time

We had a look online at all of the parks and noted down which attractions were interesting and which ones were a ‘must do’. A few things on our list were Finding Nemo The Musical (it’s written by the same people as Avenue Q!), Expedition Everest and the Happily Ever After fireworks show.

Hey, no hurling on the shell, dude, okay? Just waxed it.

Get your fast passes early and on your phone

Disney allows you to book 3 fast passes up to 30 days before you plan to use your ticket. If you download the app, you’ll be able to book more fast passes throughout the day after you’ve used them. Fast passes provide you with a window of time at an attraction to skip the main queue, and join a smaller one for fast pass holders. It’s a huge time saver.

Go straight for the popular rides

When we visited, Toy Story Land had been open for 18 days. There had been reports of 5 hour waits, and of course there were no fast passes available for the Slinky Dog Coaster. Since Hollywood Studios was our first park, we decided to rush straight to Toy Story Land to see if we could beat the queue. The Slinky Dog Coaster only had a 30 minute wait since we got there so early!

Use the single rider lines

Expedition Everest – Legend of the Forbidden Mountain was a ride we really wanted to do, it sounded awesome and it’s one of our favourites now. They have a single rider line, which is unusual for Disney World – so you can save lots of time here! Other single rider lines include Test Track and the Rock ‘N’ Roll Coaster.

Be flexible and use the app

Orlando has a tropical climate, and when there’s thunderstorms or any threats of lightning – they shut most of the outdoor coasters down. If this happens to you, check on Disney’s app for what attractions are currently open and head elsewhere. The app actually tells you what the wait times are, which can be super handy for planning your day. The app is probably one of the key things to getting through all 4 Walt Disney World parks in a day. Also, Epcot has lots of indoor attractions and generally shorter wait times!

Use the transportation provided by Disney

The 4 parks are actually quite far away from each other. There are forms of transport provided by Disney between all the parks depending where you are, in the form of buses, boats and a monorail. We were lucky because each time we went to hop on a bus, we never waited more than 5 minutes. It can take up to 20 minutes if you’re unlucky though, so keep that in mind.

Step into the world that is Pandora

Forget dining and eat on the go

We had no idea that people booked dining reservations 6 months out at Disney World. Our trip was quite spontaneous, so there wasn’t much left in terms of dining, and we worried about putting the deposit down and not making it to the park in time. Instead we ate lots of pretzels and fast food, sometimes grabbing them before getting into line so we would kill two birds with one stone! We also had protein bars and snacks with us in case we ever got stuck and had no time at all – Disney lets you bring your own food and water in.

It’s not fancy, but these are the things that help you do 4 Walt Disney World parks in just 1 day!

On the day we were at Walt Disney World, there were extra magic hours for Magic Kingdom from 11pm-1am. This means that for any guests of a Disney Resort, the rides and park will stay open for 2 extra hours. Even if you’re not a guest of a Disney Resort, you can stay in the park and enjoy yourself – and if you’re in a line for a ride before 11pm, you’ll get to go on it. Just another way of extending your time slightly!

We visited all 4 Walt Disney World parks and Rachel still had time to bug an employee to get a photo with balloons!

The planning seemed kind of stressful, but we knew that if we didn’t get to do every single thing (that’s impossible!) – it was okay. It’s pretty ambitious to do 4 Walt Disney World parks in 1 day, but it’s pretty fun to give it a go. We saw everything we had down as a ‘must do’, and had an amazing spot for the Happily Ever After Show.

Thanks so much to Walt Disney World for providing us with 2x 1-day Park Hopper tickets, we had the best day ever. Our opinions are 100% our own – if you have any questions about Walt Disney World feel free to comment below or send us a message. If you want to read about what else we did in Orlando, you can check out our post here. 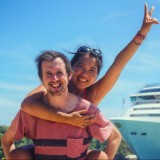